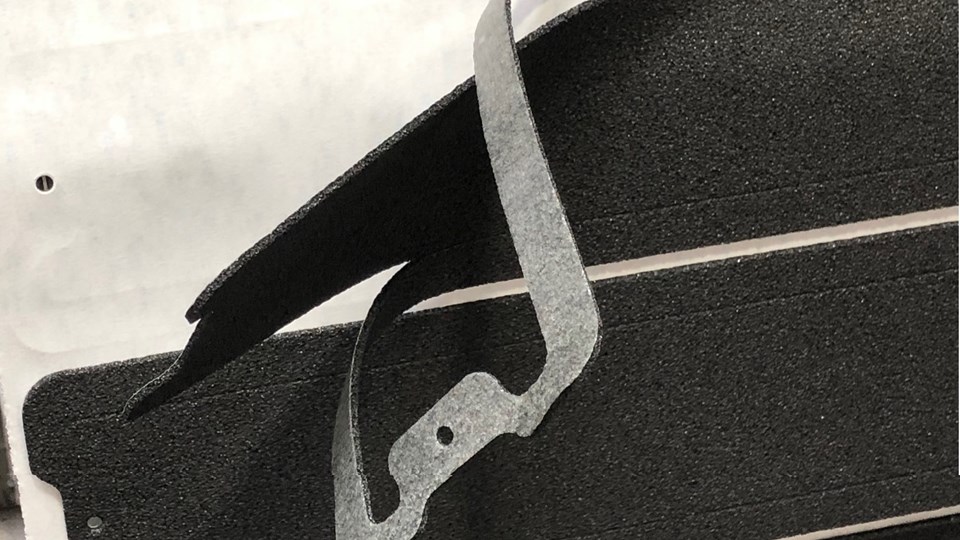 Pressure-Sensitive Adhesive – PSA, as we material converting geeks like to say – is just that, an adhesive that sticks when you apply pressure to it. And because one size doesn’t fit all, PSAs are manufactured in a wide range of constructions using an equally large number of adhesive chemistries.

As a flexible materials converter, our customers’ requirements often require us to laminate a pressure-sensitive adhesive backing to another material, like foam, felt, flock, fiberglass insulation, or even metal foil.  The PSA we use may be a high-performance, high-temperature silicone, a mid-range acrylic, or even a lower-cost, high-tack rubber adhesive.

But before we dive into the exciting world of rubber-based adhesives, we’d like to acknowledge the team at Avery Dennison Performance Tapes and thank them for the time and effort they contributed during the research and writing of this post. For it is through the picking of their collective brains that we were able to create such a well-thought-out and useful piece of rubbery, adhesive-laden content. Enjoy!

Are you ready to learn more about rubber-based pressure-sensitive adhesives and how they may be an excellent option for your custom die-cut parts? Then let's get going. 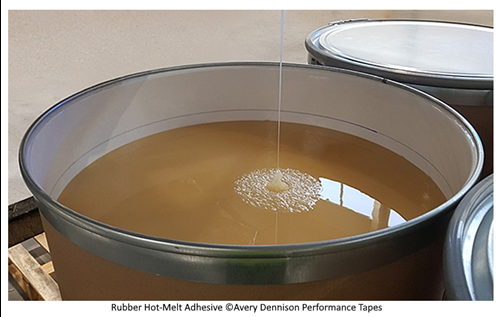 A blend of natural or synthetic rubber (the flexible stuff), tackifying resins (the sticky stuff), and other specialty performance additives (e.g., antioxidants, pigments, plasticizers, UV stabilizers) are applied to a carrier with a removable liner.

While rubber-based adhesives can’t necessarily cover the same range of applications that, say, the higher-priced acrylics and silicone adhesives can, for the right applications, they can offer an adhesive solution that’s a worthwhile balance of form, function, and economics.

Rubber Adhesives by Any Other Name: Natural vs. Synthetic Rubber

How Rubber-Based Adhesives are Made: Solvent vs. Hot-Melt

As we’ve just learned, not all rubber is created equally, and while the rubber’s base chemistry plays a significant role in the way it performs as an adhesive, so too does the way it’s made. Regarding how it’s made, rubber-based adhesives are made using two basic manufacturing methods – solvent-based and so-called hot-melt. Let’s dive a little deeper into each and learn what sets them apart from one another. 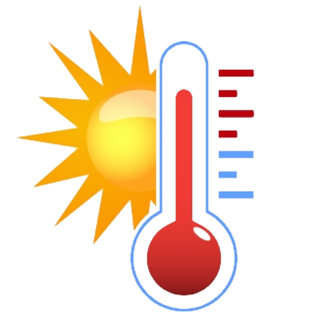 While repeated temperature cycles won’t typically damage a rubber-based adhesive tape (tapes under load and subject to shear stresses notwithstanding), they can temporarily change the physical state of the rubber material itself. Let’s look at how low and high temperatures can impact the performance of rubber adhesives.

Now that we’ve learned the basics about rubber adhesives – how they’re a great bonding option if you’re looking for a nice balance of performance, ease of use, and cost, how they’ll work across a wide range of temperatures and on most standard materials – it’s time to talk die-cutting.

Die-cutting rubber-based adhesives can be tricky; the stuff wants to stick to everything it touches. Because of their immediate adhesion and high tack, they can also leave a residue behind, not typically seen with acrylic adhesives. Die-cutting machinery and dies don’t like sticky residues. This is why your typical die-cutter wants to steer clear of processing rubber-based pressure-sensitive adhesives. JBC Technologies isn’t your typical die-cutter.

We love a challenge. Facing them, head-on is how we’ve become so good at what we do. Want a rubber adhesive on your die-cut part? Let us put our over three decades of experience to work for you, from selecting the right adhesive and substrate to dialing in the precision die-cutting of the final part. For us, it’s not just about making parts, it’s about being a part of our customer's successes.