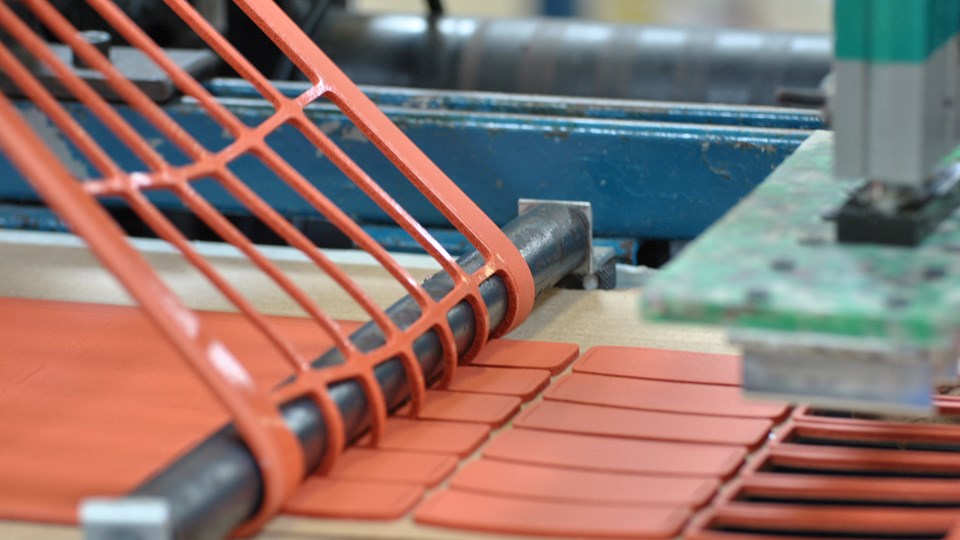 Die-cutting. What exactly is it? Quite frankly, we haven’t been able to find a really great definition online, so we’ll try our hand at making one of our own.

To distill it down into a basic, albeit wordy description:

Now that you know what die-cutting is and you’re thinking that it might be a good fit for whatever project you’re working on, are you ready to have a conversation with a professional die-cutter about it? We know that not everyone is as versed in the world of die-cutting as we are, that’s why we’ve created this handy dandy little list of ten of the most commonly used die-cutting terms to help you get started. So the next time you find yourself embroiled in a heated discussion about the pros and cons of butt cutting versus kiss cutting, you’ll be ready to join right in. 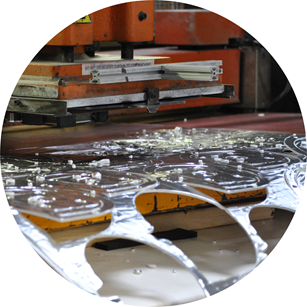 Arguably the oldest, most traditional form of die-cutting, flatbed die-cutting is the process of cutting or perforating a desired two-dimensional shape out of a thin, flexible or semi-rigid material by using a hydraulic (up and down) flatbed press and a die. At its most basic, it’s like cutting cookies out of a sheet of dough with a cookie cutter. The “cookie cutters” used by professional die-cutters are called dies or steel rule and are typically comprised of a set of blades and punches formed into the shape of the final part and fastened into either a flat piece of wood or steel plate. This die is then pressed into the material by a hydraulic piston where the blades cut through separating the finished part from the waste (matrix/webbing).

Unlike the rounded cuts produced by a rotary die-cutting machine (we’ll talk about those next), flatbed cuts are performed perpendicular to the die bed. This makes for cuts that are sharper and crisper and allows for the cutting of parts from a much broader range of material widths and thicknesses.  Steel rule dies are also easier to change out and therefore more efficient when cutting multiple shapes.

If you’re looking to churn out huge volumes of parts quickly with very tight dimensional tolerances – and accuracy and consistency are critical – you can’t do better than rotary die-cutting. Unlike a flatbed die-cutting press that stamps out the individual shapes by pushing a flat die into the material, a rotary die-cutting press uses a cylindrical steel die to roll over the material. Think of it like building the cookie cutters into the rolling pin. 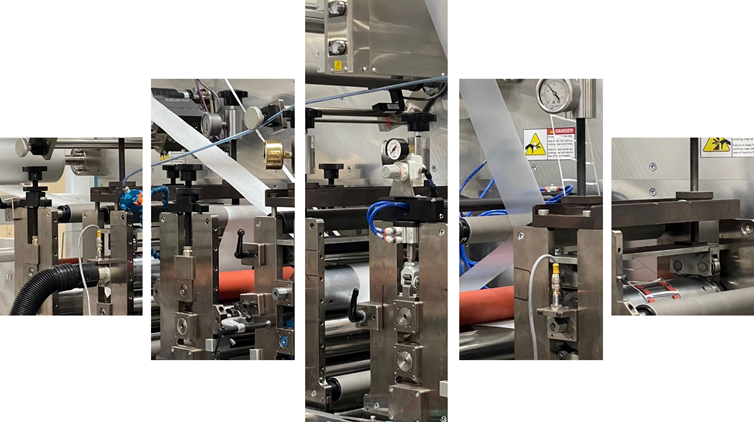 Flexible material in rolls, also called web, is fed into the press’s die-cutting station, which consists of a cutting die cylinder and a hardened anvil cylinder rotating in opposite directions to each other along their horizontal axes. The interchangeable rotary cutting die, which can be a flexible or solid die, serves as the machine tool which executes the actual cutting operation while the anvil cylinder serves as the hardened surface against which the cutting die cuts.

As the web moves through the cutting station, it passes between the rotating die cylinder and anvil cylinder. The cutting die’s edge compresses the material against the anvil until it cuts through the material. Rotary die presses can be set up with multiple stations to enable in-line operations like lamination, combinations of through-cutting and kiss cutting (more to come on these terms shortly), scoring, and sheeting, meaning there’s no reason to complete all of the different steps separately.

Kiss-cutting is also the option you’d choose if you wanted your parts presented on a roll with the waste/matrix material either removed or left in place. For even more flexibility, we can make parts that feature a combination of kiss cutting and through cutting to help minimize the mess on the assembly floor caused by loose slugs. 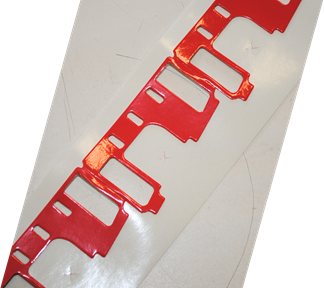 OK, hold the chuckling. Butt cutting is actually a term that refers to the process of die-cutting individual parts so that they have zero waste material between them. In other words, the two edges of the parts butt up against one another without a gap between them.

Butt cutting is most often used when making adhesive-backed parts because you’ll need some kind of liner underneath the parts to keep from turning them into through cut parts (see above if you need a refresher). Butt cut parts typically feature square-cut corner rectangles, without any gaps between individual pieces. Adhesive-backed parts are usually butt cut in order to produce the largest possible size part within the available dimensions of the laminate. Butt cutting can also be used to cut sheets of parts or to create cuts between rectangular parts that are kiss-cut to their liner backings.

This is where things get a little sticky. PSA is short for pressure-sensitive adhesive and it’s a type of non-reactive adhesive (no water, solvent, or heat is needed to make it to work) that forms its bond with a substrate when pressure is applied to it. Think of Scotch tape, bumper stickers, Post-It Notes, pretty much anything that’s peel-and-stick. JBC laminates PSA to a myriad of materials – foam, metal foil, insulation, even thin plastics – before die-cutting, to provide the parts with an adhesive backing.

As the name implies, the degree of bond is strongly influenced by the amount of pressure used to apply the adhesive to the surface. Surface characteristics like smoothness, surface energy, removal of contaminants, etc. are also important to proper bonding and should be taken into consideration during adhesive selection. PSAs are usually designed to form a bond and hold properly at room temperatures. Some can lose their tack at low temperatures and reduce their shear holding ability at high temperatures. Not to worry though, there are special adhesives that are made to function in even the most extreme environments.

Say you’re looking to create a part that will be produced in 2-dimensions but folded or formed into 3-dimensions for the final assembly application. Enter scoring. Rather than the die-cutting entirely through the material, scoring works such that the die leaves an impression, indent, or partial cut in the material at a single stress point. Typically, scoring produces a cut that penetrates no more than 50% of the material thickness. Any thicker, and you risk reducing the strength of the material at the score point to such a point that it breaks or tears. One of the advantages of scoring a part is that it allows for the formation of true square corners or bends in the final part. Need a real-world example of scoring? The next time you purchase a greeting card because you forgot someone's birthday, take a look at the spine. Changes are, there's a score there.

Some examples include laminating a PSA backing to foam rubber, laminating two pieces of insulation together to achieve a custom thickness and improved heat resistance, and combining aluminum foil, ceramic insulation, and a PSA backing to make TABshield peel-and-stick heat thermal acoustical barrier.

What makes JBC such a great die-cutting partner is our determination to maximize the part yield from the raw materials from which they are cut. When die-cutting a custom part, we try to keep the raw material costs as low as possible without sacrificing part quality. This ensures that we can offer our customer’s the best parts at a competitive price. 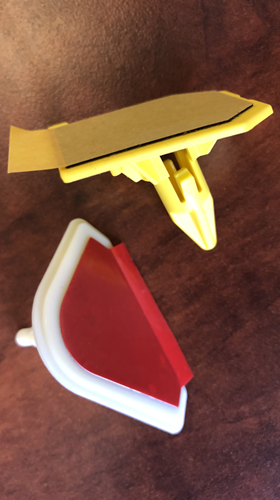 Oftentimes, a customer will be using their custom die-cut part within another assembly process, be it an assembly line operation or automated system and they don’t want to waste time trying to remove the release liners from the backs of their parts to expose the adhesive beneath. It might not seem like a big deal, but try peeling the adhesive backings off of thousands of labels or gaskets every hour by hand. That’s where pull tabs come in. Using our high-speed rotary presses, JBC can manufacture die-cut parts that feature a small, overhanging piece of release liner on one edge (just like those affixed to the small, plastic clips shown to the right) that can easily be grabbed to aid in the remove the liner in one pull and often without a great deal of fingernail picking.

Practice Your Die-Cutting Speak with Us. Let’s Chat!

When it comes to custom die-cutting, we think that we’re the best at what we do, but when you work with JBC you get more than top-quality, custom-designed parts made to your exact specifications. JBC is a partner to our customers and we work with them from early-stage concepts all the way through to mass production and beyond. If you’ve got a challenge that can be addressed with a custom die-cut part made from the world’s best specialty materials, look no further than JBC. Now that you can speak the language, let’s have a conversation!